What is a frag?

#1
ok im going to be a complete noob here and ask what does "frag" refer to? i understand its to separate corals from something, but how does one go about "fragging"? take just the coral? or part of the rock with it? and then how to you transplant from one site to another? ive seen corals on little plastic trays at the stores....what do you do with those? how do you get corals off od those to your rocks? sorry, feel free to link me somewhere if you dont want to type

M.A.S.C Club Member
#2
First Welcome But to frag is to cut a peice of the coral and attach to a new plug if you will and the coral will grow to hopefully become a new colonie to be able to frag someday!
How to frag depends on the coral, sps need good side cuts or a drmel w/ diamond bit, others like soft corals can be done w/ a razor blade, but are a bit harder to get to attach. You need to use tooth picks or fishing line woven threw the coral and under the lr you are attaching it to!

M.A.S.C Club Member
#3
frag is short for fragment. Most of the corals available to the hobby adapt very well to fragmentation, or fragging. A simple definition of fragging could be: the act of removing a small piece of a "mother colony" of coral, wether on its own, or by manual removal (i.e. cutting, etc) to be placed and eventually grown in a location remote from the "mother colonly".

that being said, some types of coral, leather corals, xenia corals, etc will oftentimes "frag" themselves. Kenya tree coral is the best example as it will oftentime literally drop branches of itself onto your substrate (live rock, sandbed, crushed coral) where the "babies" will attatch to the substrate and continue to grow. Other corals such as SPS corals (acroporas, montiporas, pocciliopora, etc) have very hard, but brittle skeletal structures that allow you to physically "snap" off a branch or cut off a branch with a pair of pliers or bone cutters, that you can then attatch to another piece of live rock to start a second colony in your tank. Other corals like a lot of the LPS corals (brains, moons, bubble corals, etc) do not readily lend themselves to the cutting or breaking or self-fragging. With these types of corals you often have to get a little more creative and use a dremel tool with a diamond tipped cut off disc, or a wet band saw like a tile saw to effectively cut into coral colonies. Because LPS corals are generally really "fleshy," great care has to be taken when fragging them, so that you do not overly damage the coral.

A lot of "fragging" is done by cutting small pieces of coral, and mounting them to readily available "frag plugs" which can then be placed on plastic trays (recessed lighting "eggcrate", found at most home improvement stores) and grown out to be sold or traded with other hobbyists. If you ever purchase frags from either a shop, or trade with a hobbyist, the coral will usually come mounted onto the plug with super glue gel or epoxy putty. Depending on the age of the frag, it may be very easy to remove it from the plug (neither the superglue gel or epoxy putty are very permanent) and then attatch it to your live rock structure, if it a newer or freshly cut frag, again using superglue gel or epoxy putty. However if the coral has been attached to the plug for some time, it may have grown so much so that it actually attached itself to the frag plug. If this is the case, you will want to find a spot in your tank where you can set the frag, plug and all, and let the coral continue to grow and eventually attach to your rockwork. In this case, the frag plug will in essence become a part of your system, however it should eventually disappear from sight as the coral, and other things like coralline algae grow over the plug.

#4
excellent! thank you very much!
C

#6
why does this have to be a sticky when I sound like such a damn noob!

M.A.S.C Club Member
#8
Ryan, your post was like, so 5 years ago though!
Premier Fish & Reef | Design | Installation | Maintenance

According to my watch, the time is now.

#11
Mine began as 1 green toadstool. It literally just drops chunks off and now... 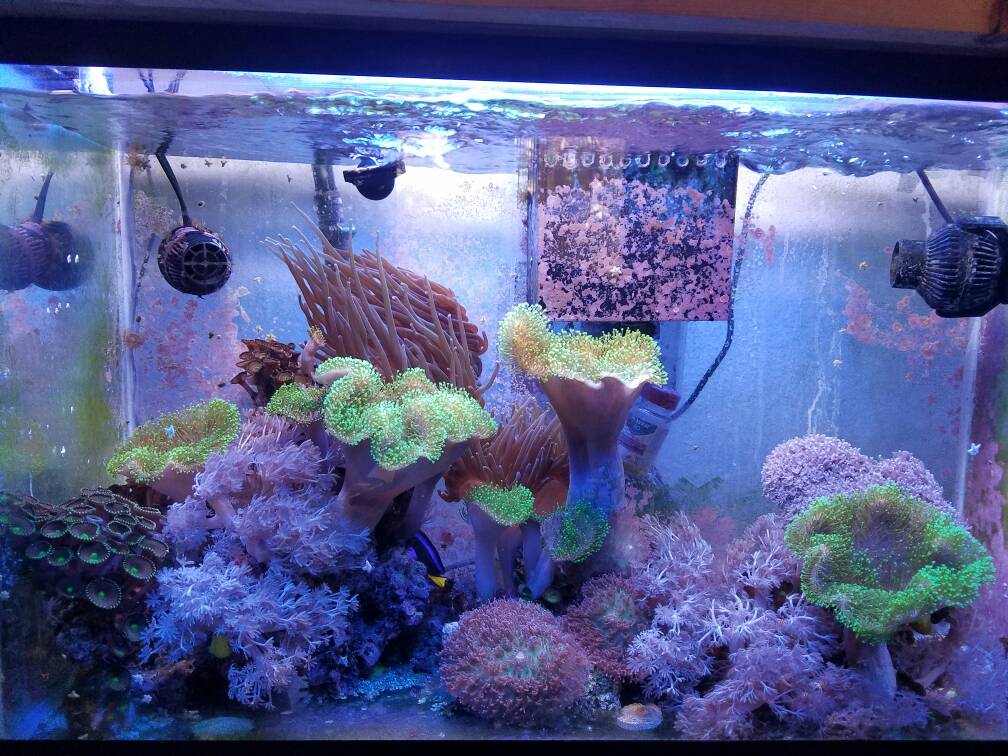 The one in the middle is the first. Some of its Frags, are larger than it now.